Following a strong finish to 2018 with C$1 BILLION reached in project financing and future commitments for our portfolio, I am pleased to begin this spring season with an overview of the 2019 first quarter activities of our five developing companies. We have harnessed the power of our legal, financing and marketing people to drive our companies forward towards their respective goals. Our mandate every quarter is to find opportunity and work towards success. We help develop companies quickly for public offerings in Canada, as we did for Canada Jetlines, and are in the process of doing for Voleo. We thrive under market uncertainty and I believe that our projects are well-positioned to capitalize on today’s investor appetite for scalable companies.

Having just returned from our Gunnison Copper Project in Arizona, I am pleased to confirm that construction is well under way, and that the next new copper producer in the United States remains on schedule to produce copper before the end of 2019. In the foreground of the photo below, you can see the completed foundations for our new acid storage tanks; the ponds are currently being upgraded and expanded, and for those with really good eyes, there are six drill rigs in the distant background where the construction of a production wellfield is underway. Excelsior’s management team has done an excellent job at both keeping the project on schedule and ensuring site safety remains the ultimate priority. Led by CEO, Stephen Twyerould, and COO, Roland Goodgame, the Gunnison Copper Project is in very capable hands as we close in on low-cost copper production. 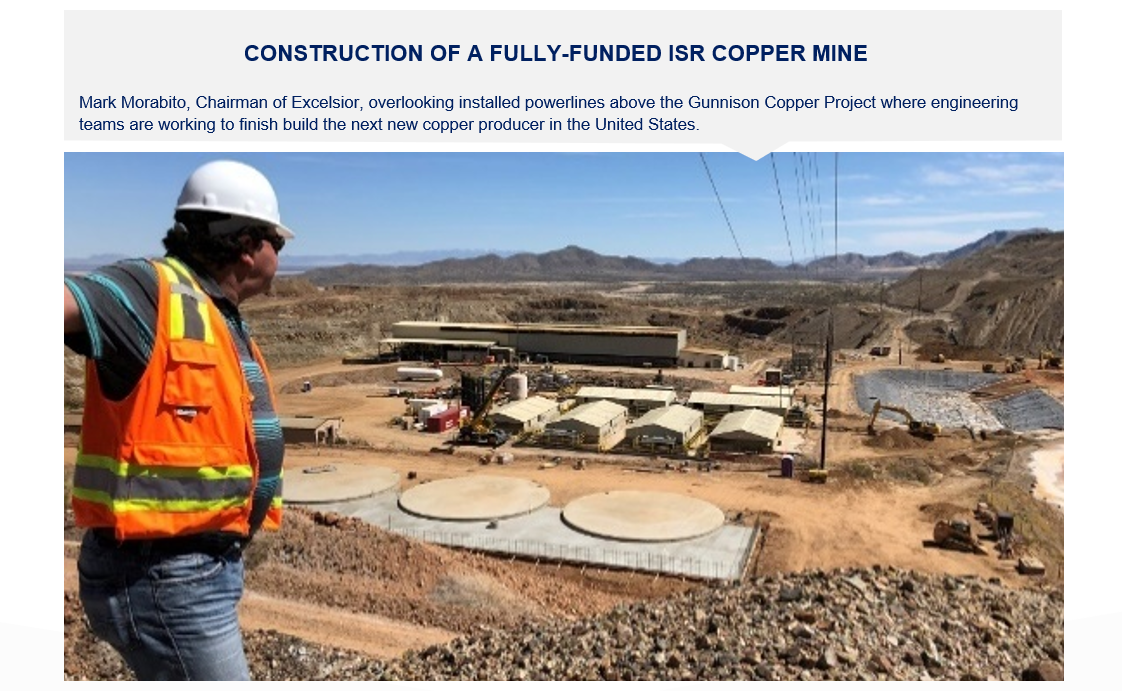 Canada Jetlines – led by CEO Javier Suarez, was named to the 2018 TSX Venture 50 list of companies and has fast tracked operational developments in record time this quarter. There are many, many agreements and partnerships required for the delivery of an ultra-low-cost carrier (ULCC) in Canada. The agreements that we have completed establish the credibility of our long-term strategy, which is to finance the launch of a true ULCC airline. Our success to date extends beyond our agreements with airports and aircraft services groups. What’s truly remarkable, is that our business plan and shift to move our home airport to Vancouver-YVR has attracted the attention of major investors overseas. I am extremely proud of the Jetlines executive team for their successful South Korea marketing road show that concluded in February, led by South Korea-based venture capital and private equity advisors ‒ InHarv Partners Ltd. The InHarv advisors who supported us in South Korea helped Jetlines secure a letter of intent with a top Korean special purpose fund for an investment of up to $14 million. A financing transaction of this size comes with extensive due diligence. Combined with the 2018 SmartLynx Airlines financing of up to $15 million and $8.8 million in proceeds received through the exercise of previously issued share purchase warrants, the Q1 2019 financing announcement further validates our business objective, which is to bring a true ULCC to unserved or underserved Canadian markets starting in December 2019. 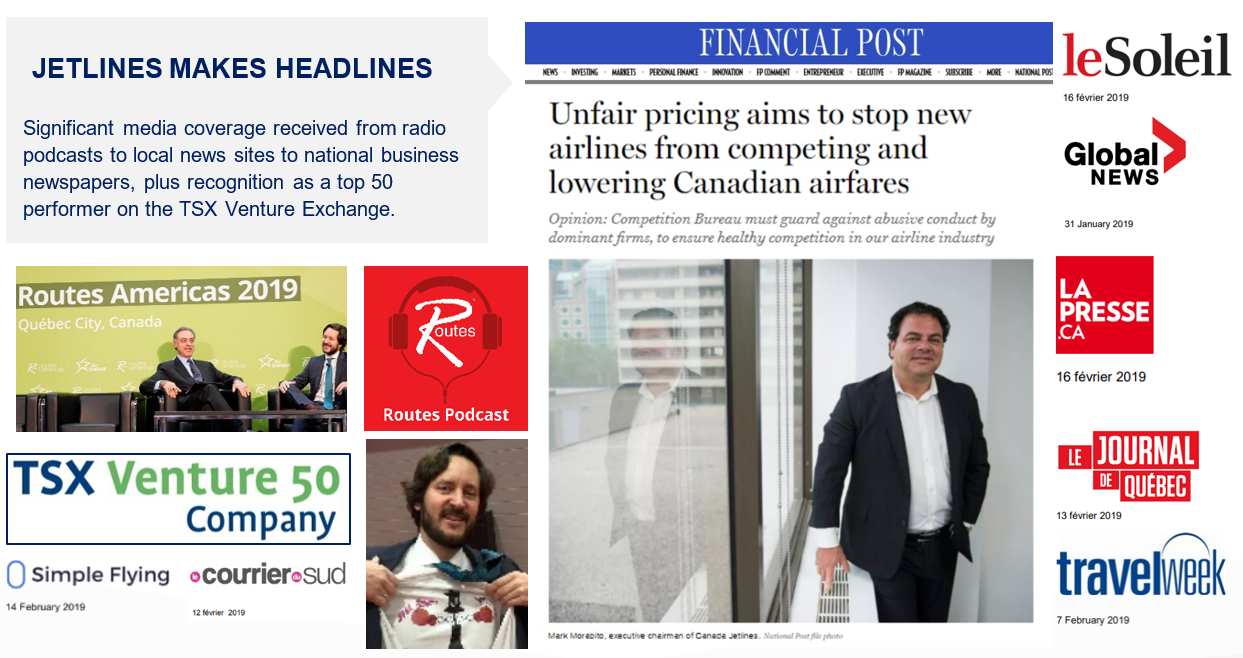 China’s commitment to curb air pollution and the resulting structural changes in its steel industry create an unparalleled opportunity for investment in projects such as Alderon’s Kami Iron Ore Project in Labrador west, which aims to serve steelmakers who need to meet strict emission standards. As we have said many times before, higher-grade ores with fewer impurities ultimately help steel mills reduce harmful climate emissions that come from steelmaking. With numerous agreements already in place and 50 per cent of detailed engineering completed, the premium-quality Kami Iron Ore Project remains a rare development opportunity. With that, Alderon CEO, Tayfun Eldem, was invited to attend the BMO Capital Markets 28th Annual Global Metals & Mining Conference in Miami, Florida, and to present at several investor events in connection with PDAC 2019 in Toronto. Alderon was a featured presenter alongside a handful of high-grade iron ore producers who are already trading at high valuation multiples. As part of his strategic plan, Tayfun met investors who may want to consider companies, such as Alderon, that are still in the development stage, but are close to commercialization. Meanwhile, Alderon announced an equipment financing MOU with Schneider Electric and an energy infrastructure MOU with Envest Corp. ‒ an independent power producer. These types of partnerships establish the elements of a broader financing solution for the Kami Project, which include strategic transactions facilitated by Scotiabank, who Alderon appointed as financial advisor in January. We later rang in the Chinese New Year in February with hopes that the Year of the Pig – Chinese symbol for wealth ‒ will see an increased appetite for new, Canadian iron ore projects in 2019.

Among the many things we do at King & Bay to advance companies, we are pleased to facilitate the complex process of bringing private companies to the public markets, such as Voleo, Inc. The highlight for Voleo and Logan Resources Ltd. this quarter was the filing of a preliminary short form prospectus dated January 11, 2019 in each of the provinces of Canada (except Québec) in connection with a proposed offering of subscription receipts. Please find further details in the Amended and Restated Preliminary Prospectus dated April 11, 2019 in connection with a proposed offering of subscription receipts to raise gross proceeds of $4 million. In addition, digital marketing CEO Nicky Senyard was appointed in January as an Independent Director. Voleo has become internationally recognized as a leader in fintech innovation and financial literacy. In the last three months alone, Voleo collaborated with Nasdaq for a second time to launch another Student Equity Trading Competition, was selected to join the 2019 Fostering Innovation Networks in a Digital Era (FINDER) Program at Radboud University ‒ located in the Netherlands, and won the FinTech Breakthrough Award for best stock trading app in 2019. These types of global partnerships and awards build a credible foundation for Voleo’s marketing strategy, which should ultimately establish Voleo as a viable fintech solution in open-banking markets globally.

The Amended Preliminary Prospectus containing important information relating to the securities being offered under the public offering has been filed with securities commissions or similar authorities in the each of the provinces of Canada (except Québec). The Amended Preliminary Prospectus is still subject to completion or amendment. There will not be any sale or any acceptance of an offer to buy the securities until a receipt for the final short form prospectus has been issued.

South Africa-based startup, Xineoh, has advanced negotiations for a licencing agreement with a multinational company, which could result in millions of dollars in savings per year with Xineoh’s algorithm. Xineoh has already completed two paid proofs-of-concept with South African companies, including one that generates more than US$1 billion in annual revenue. The research and development of Xineoh’s product are finished, and it has been proven market-ready with the two proofs-of-concept and three client-test implementations to date. Combined with US$2 million raised in 2017 through an RTO and the US$1-million equity funding round last December, Xineoh’s 2019 first-quarter US$500K financing from an institutional investor confirms my belief that AI is the future. Venture capital markets are starved for generalizable platforms that offer accuracy, scalability, quick implementation and low popularity bias. The strategy now, is to use the recent capital injections to secure licencing agreements to start generating cash flow. I am excited to be involved in this company, especially because it has attracted executives with strong technology, finance and operations experience. With the appointment of Grand Parade Investments former CEO, Alan Keet, and former CTO of News International in the United Kingdom, Xen Lategan, to Xineoh’s Board of Directors, the company is in very capable hands as it streamlines its sales and marketing efforts in South Africa and abroad. 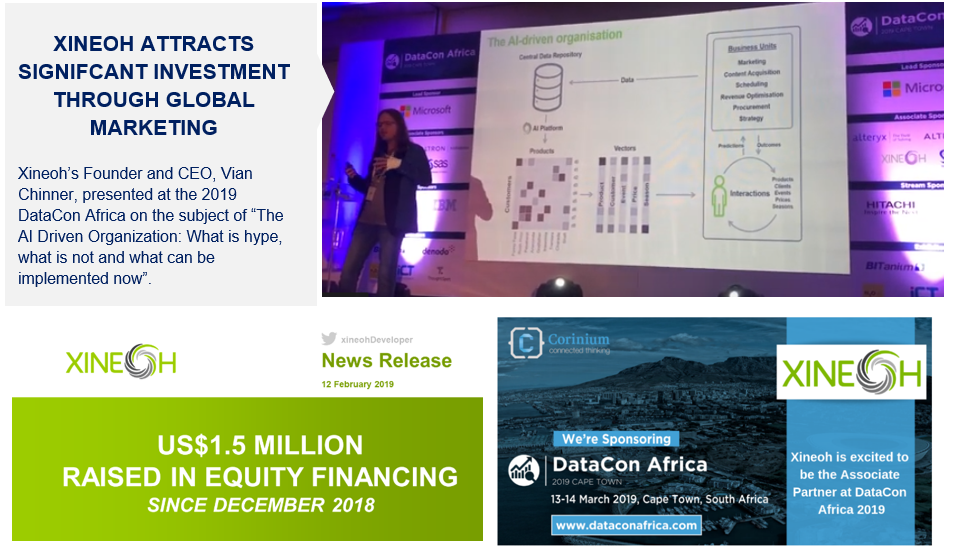 King & Bay has made significant progress with all of our portfolio companies and I anticipate an eventful second quarter.